The Zersen Family Name and Coat of Arms 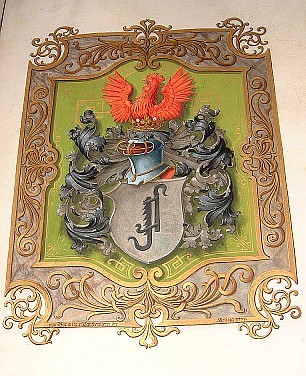 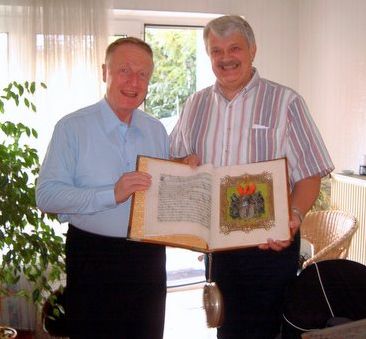 The family name Zersen/Zerssen is a place name with roots going back to the village of Zersen, Germany. The village itself is over 1000 years old.
The earliest known representatives of the name Zersen/Zerssen use the double “s”. People from the village worked for the Prince of the Castle Schaumburg, a few miles away from the village. In the 13th century, they began to name themselves after their place of origin. The first such documented name is Bertram de Chersene (or de Cersne) who died in 1266.
Those who worked for the Schaumburg prince left their roles as farmers in Zersen and held various appointments. Some simply worked at the castle, others served in military capacities as knights, and some became free citizens of towns. Often their place of origin, Zersen, became not only their surname, but a kind of distinctive title, employing the German word “von.” This word is used as a mark of nobility by these “von Zerssens” today.
Two of the von Zerssen family lines have died out and only one remains, the Statdhagener line desecended from Walter III. (mentioned in records from 1261-1307). He was a knight and ultimately the mayor of Stadthagen.
Today the German telephone directory lists only five family units descended from this line. They have a coat of arms which portrays a pothook beneath a knight's helmet, showing both the rural and royal descent.
All other living Zersen/Zerssens are descended from Cord Zersen who was born in Hammelspringe in 1623. Other family lines with the name Zersen may once have lived in the village or in other places, but all the Zersen family units today listed in phone directories in Germany (10) and the United States (23) are related. One family that uses the double “s” spelling is also related.
Only one Zersen, Carl Ludwig, imigrated from Haddessen to the United States in 1857. All Zersens and members of the extended Zersen family in the U.S. are descended from him.
In all, there are only 38 Zersen/Zerssen family units in the world, a very ancient and a very small group.
Current research is trying to establish when the Zersen family left the village of Zersen and how they may be related to members of the von Zerssen line.
Various spellings of the name from 1432-1564 include: von Zerssen, von Tserssen, von Certzen. von Tzertzen, von Zertzen, vann Zertzenn, von Sertzen, von Certsen, von Zerzen, von Zersen.
Please send me your comments or corrections.
Compiler of this family history: Dwain Brown
Site updated on 25 May 2022 at 9:55 AM from Zersen; 876 people
Page created by John Cardinal's GedSite v4.06.01  |  Based on a design by growldesign